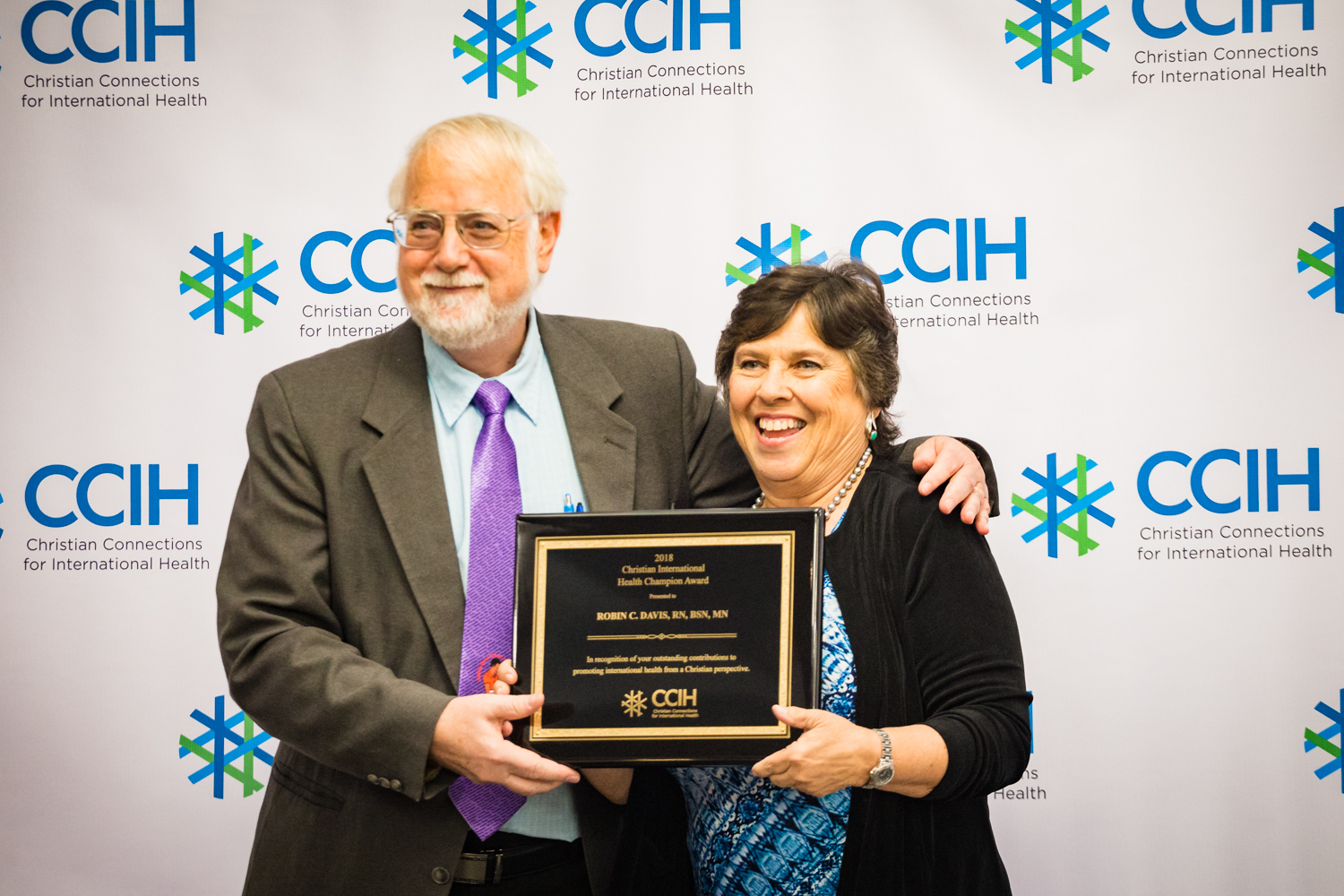 Robin Davis, MN, RN, President Emerita of Global Health Action, a CCIH affiliate, received the 2018 CCIH Christian International Health Champion award at the annual conference in July. The CCIH Christian International Health Champion Award was launched in 2014 to honor an individual who has dedicated his/her life to global health from a Christian perspective and has made significant contributions to the field and to CCIH.

Robin was part of the group who saw the need to encourage networking and to promote the role of faith and faith-based organizations within global health. While serving on Global Health Council’s board (then known as National Council for International Health), Robin helped mobilize an informal coalition of faith-based members to promote their community health initiatives and amplify their voices. Out of the success of the informal coalition (initially called the Conference of Christians for International Health), Robin helped formalize CCIH as an organization in her role as CCIH Board President chairing the collective Board process of drafting bylaws and articles of incorporation and selecting the new name and logo. She served as CCIH’s first Board President from 1992-1996. In the days before CCIH hired staff, Robin helped coordinate conferences, grow membership, and launch a newsletter.

Robin’s professional experience as President of Global Health Action was exactly the kind of leadership that CCIH needed. She provided CCIH with the experienced organizational know-how to evolve CCIH from being an “informal annual gathering to network” to becoming a “formal networking organization.”

“During the formative years of CCIH, it was clear that international health professionals, rooted by their faith, wanted and needed an organization that would provide opportunities to connect, grow and serve in fellowship with others,” explained Robin. “Working in international health can be very rewarding and also demanding at the same time www.galarson.com. Therefore, working with partners who share a common vision and mission in the world lightens our load and increases our overall impact. Today, CCIH continues to grow as a forum and a vital connecting point for members and those we serve to promote better health for all. The friends, colleagues and partners that I have developed over the years through CCIH have enriched my life and my work in international health. I am honored and humbled to receive the 2018 Christian International Health Champion award through CCIH.”

Robin was nominated by Wendy Jolley-Kabi, President and CEO of Global Health Action. “Robin’s greatest contribution to global health from a Christian perspective has been her distinct commitment to building partnerships between government and church organizations around the world so that together they could address the health needs of their communities,” said Wendy. “Robin has bridged the divide that too often exists between the church and other stakeholders in the community health arena. This has been her faith in action.” More about the Award